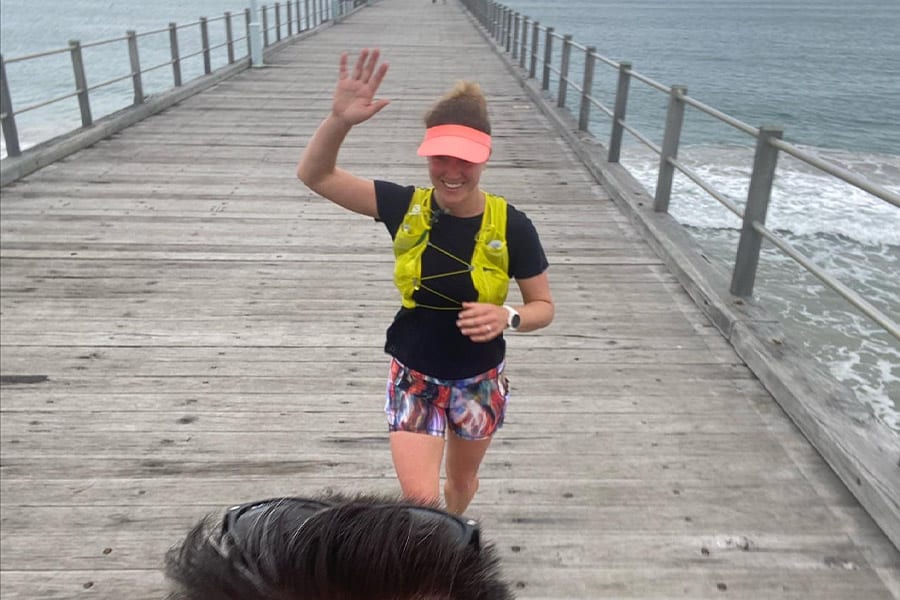 Aiming to achieve and inspire, Coffs Harbour-based Ingrid had planned on pulling on her running shoes for the Gold Coast Marathon earlier this month. It was to be her first crack at 42.2 kilometres, a distance she was training for but had never run.

Unfortunately, the event was cancelled due to COVID-19, but undaunted Ingrid kicked into ‘plan B’ and ran a ‘virtual marathon’ around Coffs Harbour instead.

‘I transferred to the virtual event and set out for my big old run on Saturday morning (3 July),’ she said.

‘It was cool and slightly overcast, so perfect conditions for a run. I even met a few other people along the way who were completing their own virtual races, which was just lovely. What was also lovely was that my fiancé came out and ran the last 10km with me, which helped a lot. I was definitely ready for some company by that point.’

Despite not aiming for a particular time, Ingrid came in at a very respectable 4 hours and 15 minutes. As a first-time marathoner, she was ‘absolutely stoked’.

‘I like to find out where my edges are and I like to challenge myself,’ Ingrid said. ‘A marathon has been on my mind for a few years as something I wanted to do.

‘I also have a bunch of teenagers in my life — my stepkids, my nieces and nephews. I like showing them and being a living example that it’s worthwhile trying things, that there’s value in giving stuff a go even if it’s really hard — especially when it’s really hard.’

Ingrid began pounding the pavement in her late 20s as a strategy to help her emerge from a major depressive episode.

‘Adjusting my diet and having that regular exercise, exercise that pushes you, are kind of the building blocks of my strong mental health,’ she said.

‘I think that makes a massive difference and it’s something that you have the power to change and implement and support yourself.’

Until this month, Ingrid’s longest run was 32km, so her marathon effort meant she was stepping up considerably in distance.

‘I wasn’t entirely confident – the biggest challenge is mental, dealing with the gap between where you train to and the actual distance of the race,’ she said.

‘My focus wasn’t on a time, but on finishing. I was breaking it down in my mind as four lots of 10-and-a-half kilometres. I do my 10-and-a-half, take a breath, have a drink and give myself a pat on the back and then I do another one. That’s how I was going to get through it.’

Her training routine consists of four or five runs a week, ranging from one to three hours duration, as well as strength work and yoga. Along with the health and fitness benefits, the buzz keeps her coming back for more.

‘The best is when you hit that flow state where you are moving and it feels almost effortless and completely natural,’ Ingrid said. ‘It’s like meditation, it’s awesome and it sometimes lasts for a couple of hours. There’s also the high you get after running.’

Pictured: Ingrid Sivertsen in action in Coffs Harbour as she runs a ‘virtual marathon’ following the cancellation of the Gold Coast Marathon earlier this month.