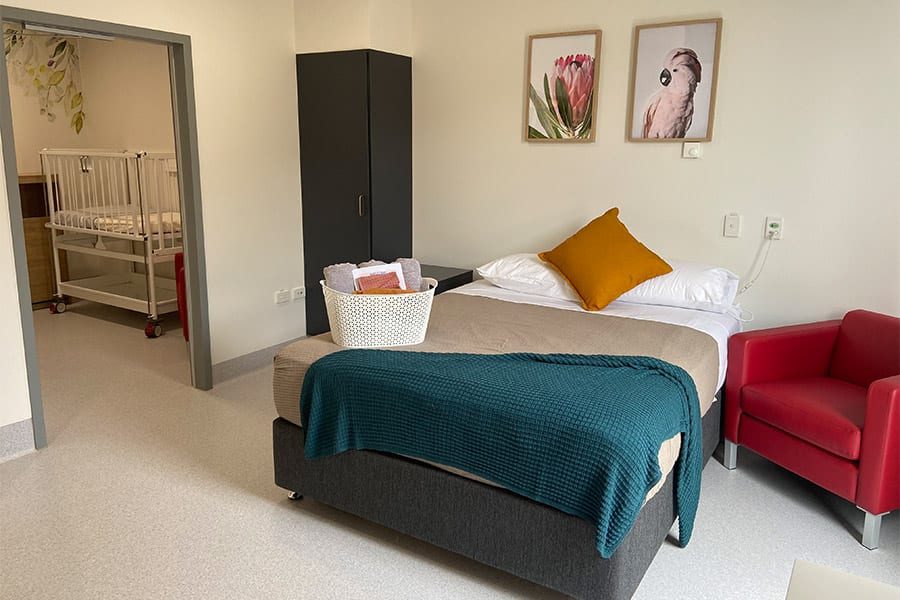 The new Tresillian Macksville Residential Unit is accepting referrals. It is the first regional inpatient specialist child and family health unit to be established in Australia.

GPs and other health professionals can refer families to the residential unit by clicking here and choosing Macksville as the location option on the last page.

Tresillian has partnered with the Mid North Coast Local Health District to establish the new unit, which consists of four family suites. It is for the families of children aged from birth to 36 months who are experiencing significant parenting challenges that require intensive intervention and strategies to promote family health and wellbeing.

Families are admitted for four nights/five days. An interprofessional team provides care and, in partnership with families, aims to increase confidence, resolve concerns and provide guidance on issues such as:

Upon admission, nurses will conduct a psychosocial assessment. Individuals deemed to be at risk of moderate postnatal depression and/or anxiety will be further assessed by a psychologist or appropriately qualified social worker or mental health nurse. Further psychiatric assessment is also available following the psychosocial assessment and review if required.

Tresillian estimates, based on experience in other centres, that around 30 per cent of clients will require a psychological assessment.

For more information on the Tresillian Macksville Residential Unit and its services, contact Mel Tait on 0428 923 531 or email: [email protected]

Tresillian also offers services (including day services) at the Tresillian Coffs Harbour Family Care Centre and from the Tresillian 2U Mobile Van, which visits Bowraville, Macksville, Nambucca Heads, Kempsey and Wauchope on a rotating schedule, telephone (02) 6691 1912 or 0456 956 673.

Susie was so excited to welcome her first baby, Noah, after a normal delivery, but in the second week after Noah’s birth, Susie felt unwell.

Susie was admitted to hospital, where she found it difficult to care for a new baby. She was placed on antibiotics.

Soon after, Susie noticed that Noah was becoming increasingly unsettled and had difficulty going to sleep. Although she thought it might be the effect of the antibiotics, his unsettled behaviour only became worse after she stopped taking them.

Susie was referred by her child and family health nurse to the Tresillian2U mobile service for comprehensive assessment and support with Noah’s sleep difficulties.

The Tresillian2U nurse identified that Susie was showing signs of depression and anxiety. She’d previously had an eating disorder.

Susie was referred to her GP and commenced taking antidepressants. Noah’s unsettled behaviour was most pronounced at night, so the Tresillian2U nurse provided a referral for Susie and Noah to the new Tresillian Macksville Residential Unit.

On arriving at the unit, Susie was incredibly relieved and thankful she could access this service on the Mid North Coast, saying, “There is no way I could have taken him to Sydney, he screams in the car the whole time.”

Susie was also able to have a review with the psychiatric registrar and Tresillian clinical nurse consultant-perinatal mental health, who liaised with her GP about the ongoing plan to treat her symptoms of depression and anxiety.

Susie said the support of the staff and nurses ‘meant I felt really safe, supported and empowered, building my confidence up’.